During her residency at the Centre d’Art Le LAIT in Albi, the artist developed the project “Prospective”. The title responds to a titanic endeavour: the prospective of the new challenges faced by humanity. Her approach implies that art and culture can take part in this process too. Her starting point was the lichen as a metaphor of symbiotic consortia and its scientific, artistic and aesthetic possibilities both as a concept and as a material. For Cristina Ferrández, lichens represent a living example of universal symbiogenesis. Her research focused on the following ideas:

1. Lichens as a metaphor of a possible relationship and coexistence between humans and the Biosphere.

Lichens are a symbiotic association of ascomycetes (the fungal partner) with green algae or cyanobacteria in a mutually beneficial relationship. They are bioindicators on air quality and bioacumulators, an important idea to develop her work in residence. 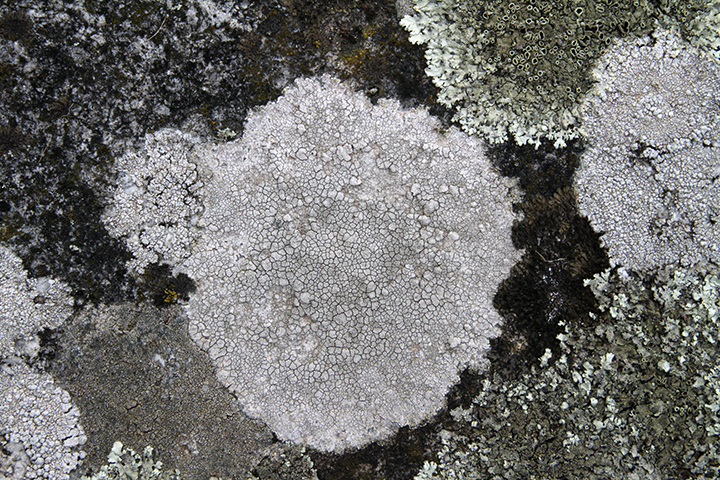 2. The concept of symbiogenesis; its theoretical and philosophical implications.

Symbiogenesis is an evolutive theory promoted by the biologist Lynn Margulis. It opposes competition-oriented views of evolution and stresses the importance of symbiotic or cooperative relationships between species. According to scientist (Evolutionary Epistemology) Nathalie Gontier, ‘symbiogenesis can be universalized and can include hybridization, and extra-biological phenomena such as culture and language evolution and even certain cosmological processes (also symbiotic stars, galactic cannibalism or black holes can be understood as forms of symbiogenesis)’. In a visionary way, it can also comprise a new concept of progress and development, where humanity evolves by living with the biosphere in harmony, replacing the notion of domain.

3. Relationship between map and territory. Cartography as a method of depicting reality.

The artist focused on diverse aspects of reality in relation to natural resources, for example, on scientific and big data as a material that can be turned into artistic concepts and eventually incorporated into the discourse. 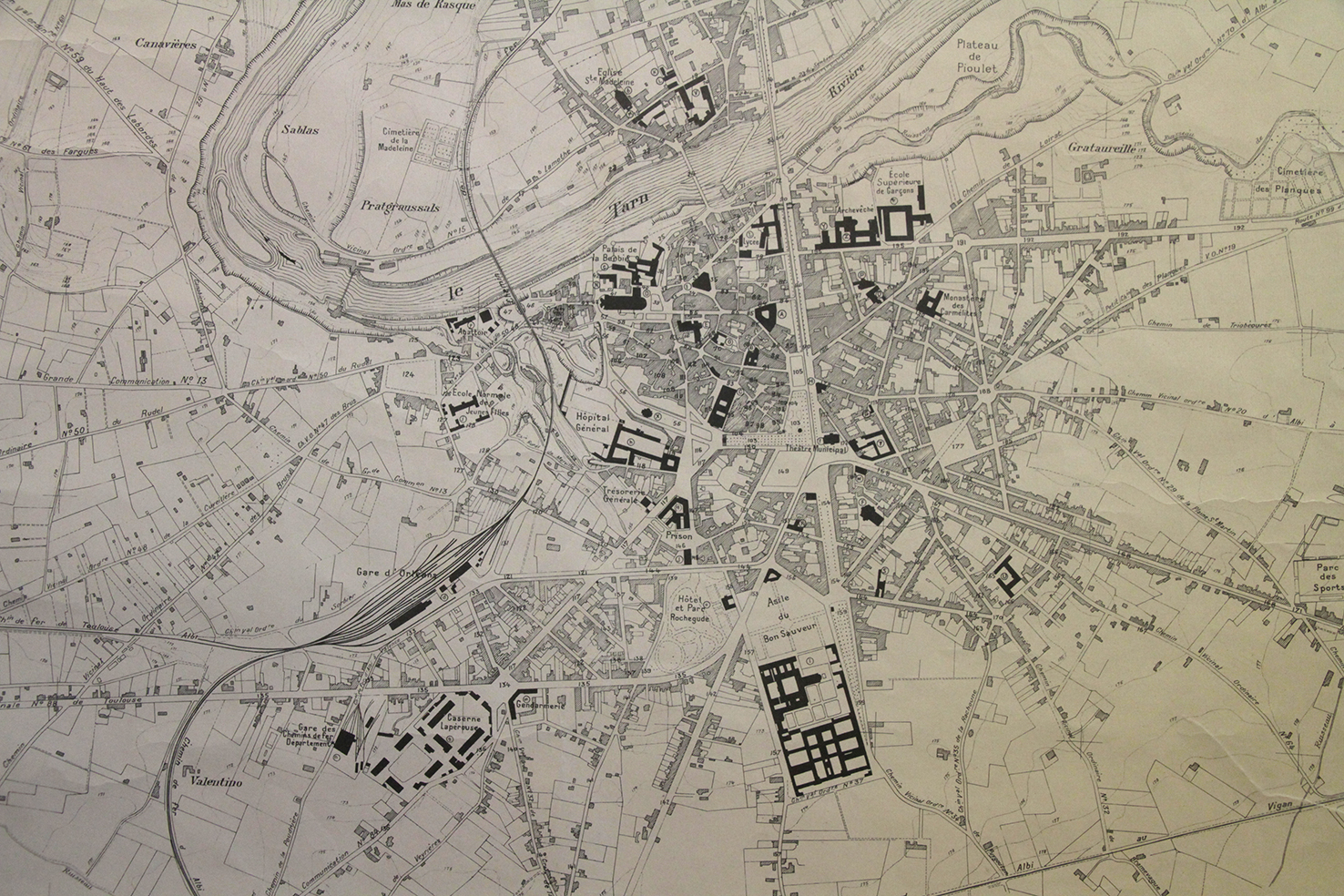 As a whole, her approach through these three ideas leads to the science of Foresight or Future Studies.

In Albi, the research took form by means of her experiences in the city and the encounters and meetings with people. This transformed her time and space into a kind of permeable membrane with a bidirectional transmission. Ferrández wonders about how the project operates as a link between different entities, the artist, people involved and the city in order to create something new from previous concepts. Somehow, it was a symbiotic process of knowledge and thoughts by means of the artistic practice.

Her research was presented at Ici‒même, a creative, ephemeral and collective project, taking place from March to October 2018 in commercial premises unoccupied and loaned for the initiative in Albi. Her exhibition, called “Prospective”, included three artworks that expanded in different media and relate to the main points of her research:

1. A hand-made chalk mural using Albi’s cartography associated with growth on a specific ground, aiming to create a parallelism between lichens as a growing element on a matter and their neutral relation with it. As the lichen grows in symbiosis, it becomes a metaphor of the relationship between us as citizens living and working together for shared purposes and our relationship with biodiversity and urban forms. The artist used big data from the 2017 Air Purity Index (IAP) in the city as an indicator of lichen growth and a way to point to the air as an element that has to be taken care of. 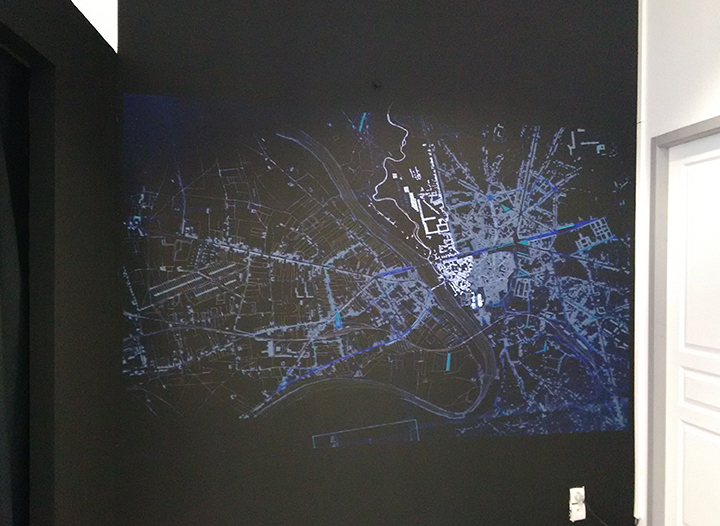 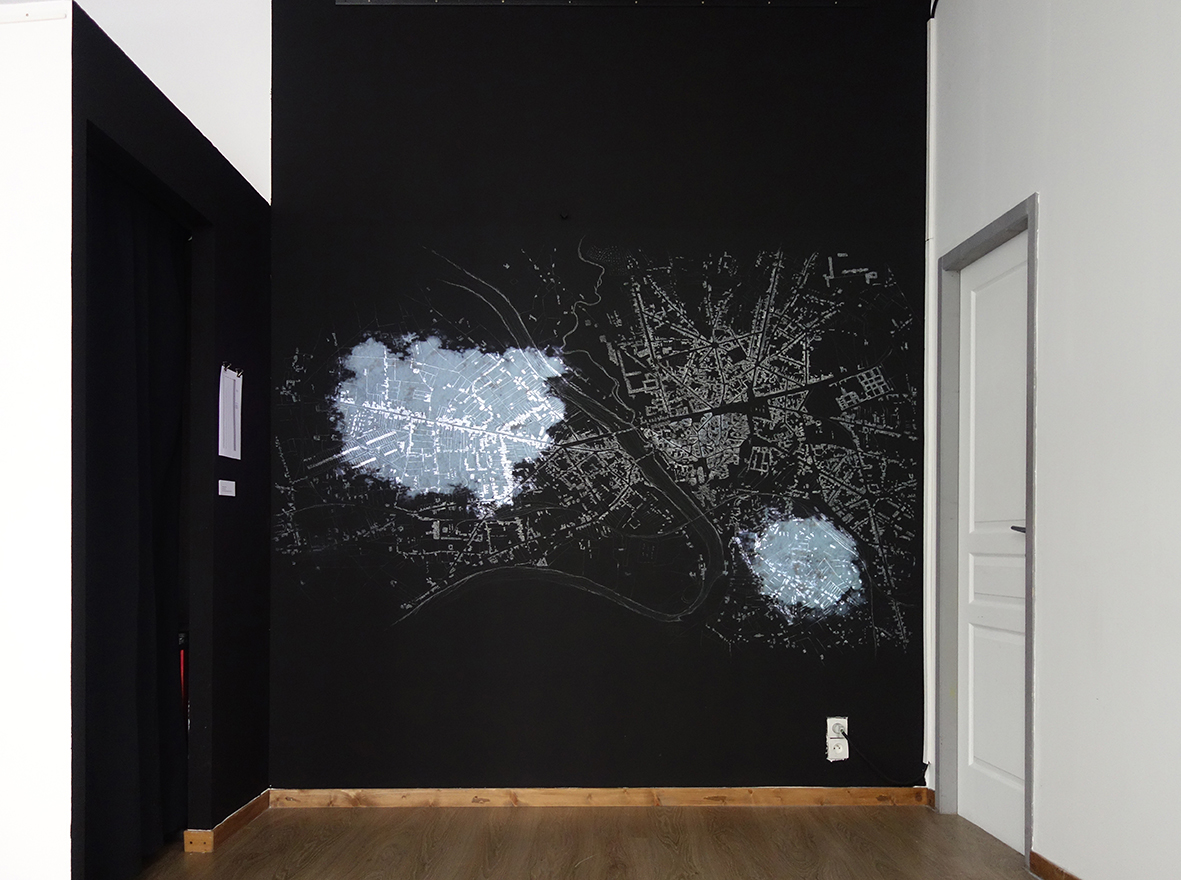 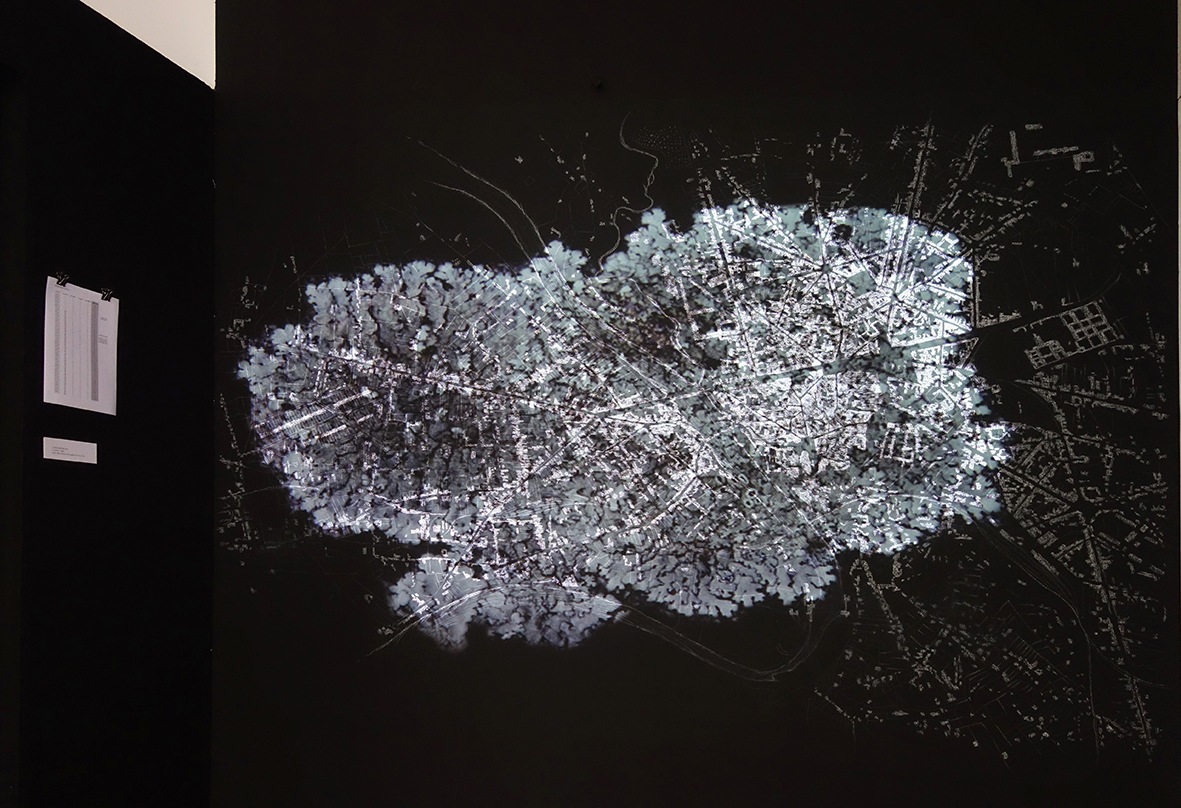 2. A video projection of the world planisphere combined with big data of common goods (i.e. water and forest growth and loss). This piece addresses the need of water and the transformations of territory, especially focusing on the local case of the Sivens Dam, close to Albi. 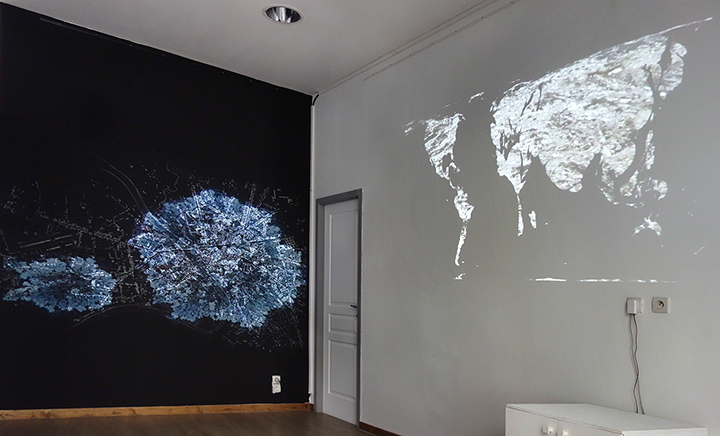 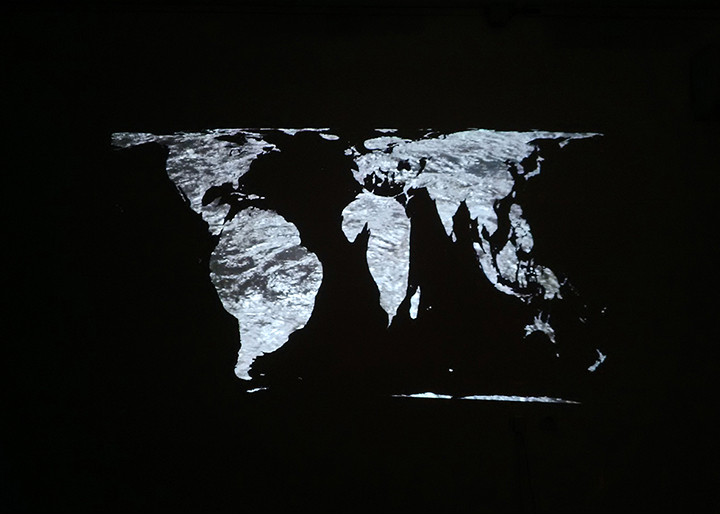 3. A game created by the artist, called “Le jeu”: a piece of wood and ceramic blocks recovered from an old and public farm which suffered a conflictive demolition during her residency. There are no winners or losers in the game, just building collaboratively new junctions, bridges and structures from the ruins. It is a symbiogenesis metaphor. 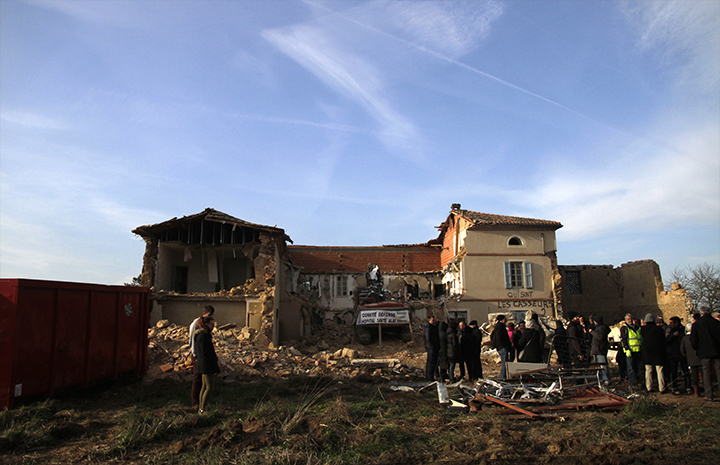 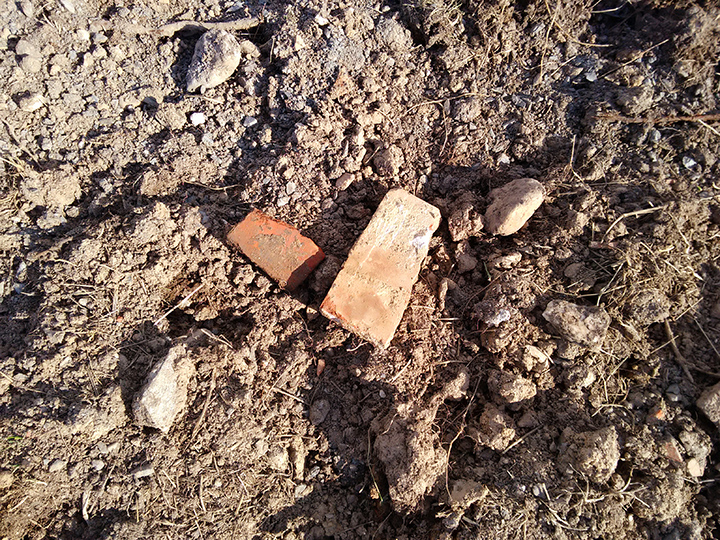 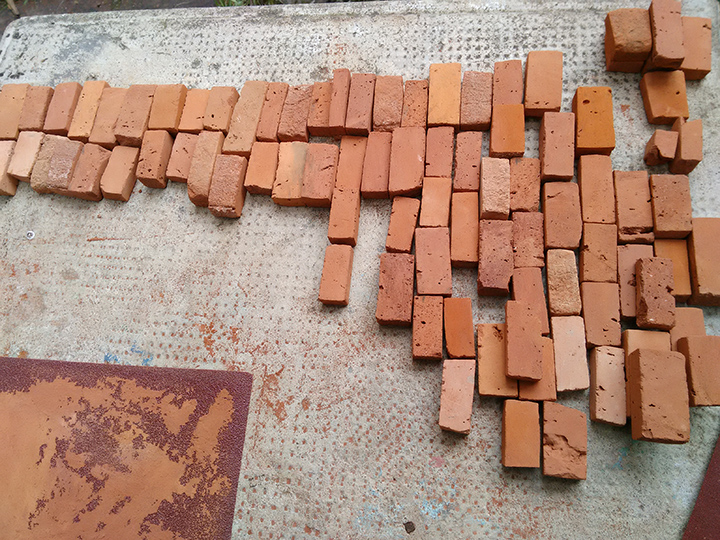 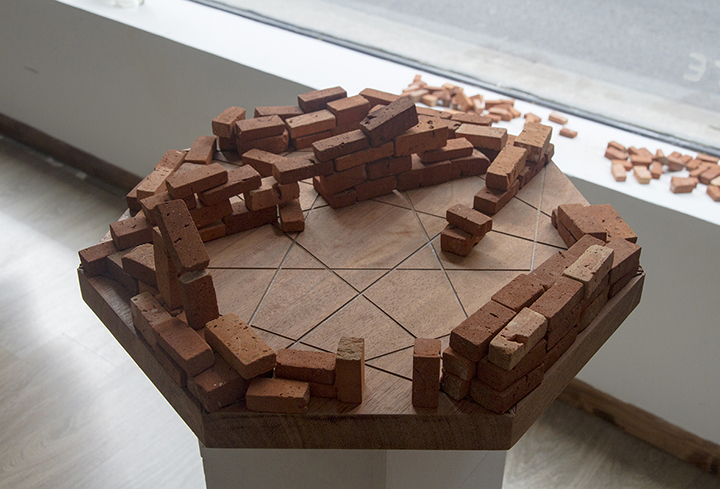 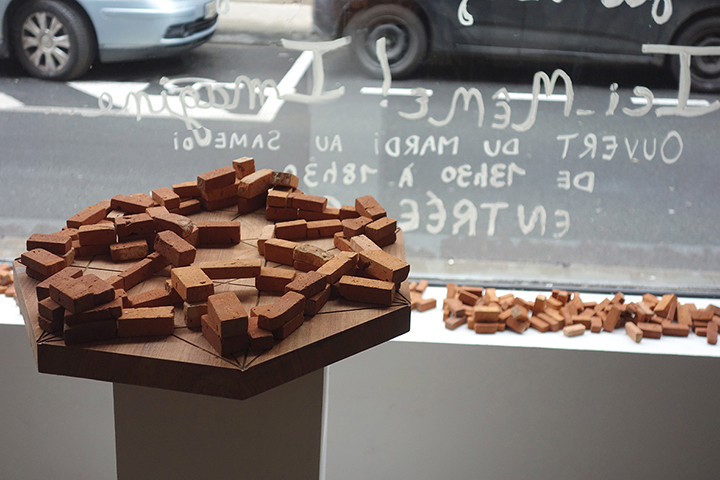 During the residency her mentor was Bertrand Poupounot.